“Triangle! Triangle!” Vinnie called from the wing, thumbs together, index fingers raised to a point. A triangle we’d learned in Geometry to identify as isosceles.

But here on the court, we didn’t have Geometry in mind. Everyone wanted to shoot every possession and we passed just enough to ensure someone might return the favor later on.

“Triangle!” Vinnie insisted. I suspected I was the only one who knew what he was talking about. For sure, I was the only one to approximate the right location above the three point arc. We’d heard Hubie Brown break down bits and pieces of the Triangle Offense, calling it key to the Bulls’ success. I didn’t like Hubie. Thought he sounded old and too much like a teacher and questioned if the Triangle were so key, why other teams didn’t rip off the formula.

But Vinnie studied it. Got on dial-up Internet after the game, got into Web Crawler and scoured page after page to understand. Explained no one copied the Triangle because no one took the time to learn it, much less to build a roster tailor fit to the model.

“Square! Square!” One of the guys from the other team hollered. The one who’d taken to calling Vinnie Vaggie in elementary school, after we learned the word vagina. The one who leaned over my shoulder during Geometry tests. I blocked his view and he nailed me in the shoulder in the hallway afterward. I learned to leave him a clear view ever since.

He was the one to pick off a bad pass—the Triangle can’t work with just two guys playing it—and he led the fast break to the other side. He thrusted the ball behind his back quick and smooth, as if it were orbiting him, before he stretched his arm wide for the layup. No one called him for traveling.

I took a pass this time, got the ball, ignored the Triangle and drove to the basket hard and fast. No good shot, but I heaved it up anyway, like I imagined Michael Jordan would have. Trusting in myself and that something would happen, while Vinnie stood waiting for the pass that would never come.

Tumbler of well whisky on ice in hand, the closed captioning described him as ANNOUNCER 2. An ad-libbed one-liner about the statistically best free throw shooters in NBA history, and I was clued in before the camera panned to him. I knew that it was Jeff Van Gundy.

Van Gundy, whom I remembered as coach of the New York Knicks in my teenage years. Van Gundy, who had apprenticed under Pat Riley, who Riley had chastised for working too hard as an assistant coach, was gathering scouting reports for the All-Star Game when everyone knew that one is supposed to be just for fun. A break. The game no one worked hard on.

We’d loved him. Rings beneath his eyes darker as each season wore on, balding, small, always in a suit, getting dragged across the court as he clung to Alonzo Mourning’s ankle in an effort to stop, or at least impede, a Playoff brawl that would result in suspensions if not bloodshed.

All those years later, no longer held responsible for wins and losses of a big market team, he looked younger than I ever remembered. I tried to imagine him younger, too. He went to Nazareth College, a little liberal arts school in Western New York, a couple hours from where I grew up. A school notorious for having three women enrolled for every young man. This was where Van Gundy came from, this workaholic whose obsession carried him to The Big Apple, and all these years later to this television over this Midwest bar.

Dwight Howard got fouled for two. He shot a brick for the first free throw. Van Gundy said, there’s no excuse for that.

“Another?” the bartender asked. If I squinted my eyes, I might’ve mistaken her black tank top for a basketball jersey. But she was oblivious to the world behind her. This game of little consequence here in Pistons-Pacers-Bucks territory, even if she were a basketball fan.

Here we go, Van Gundy said as the brown liquor poured, as Howard bounced the ball once, twice, blinking away sweat, lifted the ball again, bent his knees and elbows, and took another shot. 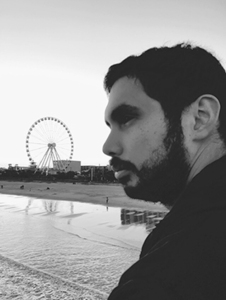 Michael Chin was born and raised in Utica, New York, and is an alum of Oregon State’s MFA Program. He won Bayou Magazine‘s Jim Knudsen Editor’s Prize for fiction and has work published or forthcoming in journals including The Normal School, Passages North, and Hobart. He works as a contributing editor for Moss. Find him online at miketchin.com or follow him on Twitter @miketchin.