Claire sat down in the chair in the café with force. Her almost white hair, still long, hung down over her scarf. The café was already beginning to fill up with a mix of students and professional workers. Low spoken but animated discussions filled the place. A hand placed on the arm of someone who was straying from the conversation to dangerous talk, a look of caution on the face of another.

“Can you believe the insane executive order that came out today? How this pusillanimous piece of crap became the leader of our country and is still in office after 3 years of chaos is beyond me,” she whispered. In years past she would have shouted it out. But not anymore. The wrong ears might be listening.

“Hi Claire,” said Anthony, smiling as Claire put her notebook on the table.

“Hi Anthony,” Claire said as she reached out and squeezed his arm in greeting. “Don’t mind me. It just builds up you know. Are Mitch and Garrett coming?”

“Garrett said he would if he could shake his watcher,” Anthony said as he looked around. “And you might want to close your notebook. Prying eyes you know.”

Clair closed the lid. “Old habits die hard as you well know Anthony. And we are the old timers. We’ve seen this shit before. Even fucking Nixon wasn’t this bad. You know what I would like to see? This orange buffoon stripped naked, a broom stuffed up his ass and made to sweep the streets with it.”

Anthony burst out laughing. “Don’t hold anything back Claire, let me know how you really feel.”

Garrett walked through the door and strode over to the table. Since the union shut down due to lack of funds because of a Supreme Court ruling on dues deductions he had time on his hands. Even though he was only in his early 40s he was having trouble finding a new job. A blacklist going around had his name on it.

“Hi you two,” he said. The smile belied the tension and worry in his face.

“When he didn’t come home I knew something was up. They got him at work. They knew he was one of the leaders of Saturday’s demonstration. With the new law holding leaders accountable for demonstrations that turn violent he was ripe for a pickup. He is in that new detention center outside of town.”

“Let’s call it what it is Garrett, a fucking concentration camp run by a corporation,” said Claire, barely holding her temper in check. “And it got violent because we had provocateurs stirring shit up. Probably work for the FBI.”

“Could have been some of ours. People are fed up Claire.”

“It’s a good thing we have some new people willing to step up and take leadership roles but that can’t go on. Too many have been taken and people are starting to hesitate,” said Anthony.

“And our table for four is shrinking,” as he looked at the chair Mitch would have been in.

“I am surprised the bastards don’t have us wearing labels on our clothes. Anthony, yours can be red and grey for being an old commie,” Claire chuckled. “Mine can be the middle finger sticking up for just being an angry old fuck.”

Garrett smiled. The tension left his face. “Leave it to you to tell it like it is Claire.”

Claire looked around. “OK, let’s get down to business. The committee has sent word to the network that there will be a major demonstration at the camp in 2 weeks. Cells have been reporting in that people are itching for a fight.”

Conversation in the café stopped. A police car drove by slowly. Gone was the Protect and Serve logo on the door. Now it said Make America Great Again.

When the police had gone by the murmur of voices picked up again.

“OK Claire, but what about the cops? The militarization has come back with a vengeance.”

“Work has been going on there too. You know Garrett, when the unions got defunded it also included the police unions. A major mistake on the part of the powers that be. The cops ain’t too happy. They don’t like us and there are some bad feelings, but they have agreed to be neutral if the shit hits the fan. And we need them to be neutral. No way will they side with us, but the committee actually went old school and printed up a pamphlet about the Boston Police strike of 1919. Most cops here had never heard of it because the history was suppressed, like all labor history.”

“Well, let’s hope they stay neutral because otherwise we get shredded,” said Garrett.

“Do you hear that?” said Anthony.

Claire looked at him puzzled. “Christ Anthony. You got voices in your head now?”

Garrett looked towards the café door. “No Claire, I hear it too.”

It started out as a murmur and built to a crescendo of voices. The door of the café flew open and a young girl ran over to a table and said something to the people sitting there who promptly got up and left.

“Hey, what is going on,” Claire called out.

The girl breathless spewed out a torrent of words.

With that she flew out of the café.

“Holy shit. Looks like the revolution started without us,” said Anthony.

“Ain’t that the way it always is. The best laid plans as they say,” Claire said with a smile.

“What do you say Garrett. Let’s go get Mitch. He has a chair waiting for him,” said Anthony. 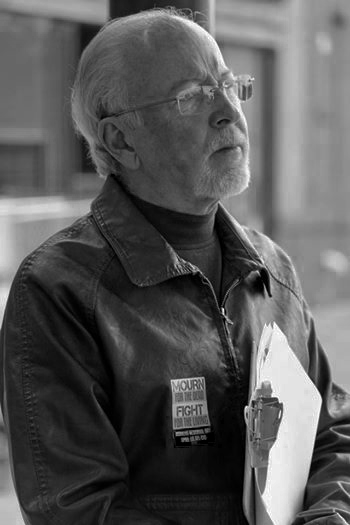 Lee Conrad lives in upstate New York. He is a Vietnam-era veteran who was anti-war while serving. He worked at IBM and was a rabble rousing union organizer—all-in-all just a bit of a trouble maker. His work in the labor movement took him all over the country and the world. He is retired but not silent. When not writing short stories he reads, works in the garden, or goes to a local demonstration for his fair share of abuse. His stories have appeared in Down in the Dirt, Fiction on the Web, and Literally Stories.